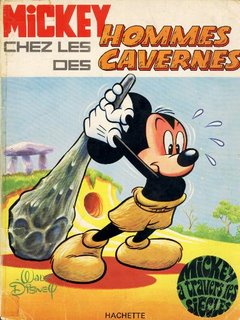 While googling "Titans" of Greek mythology the other day I came across an odd time travel reference a French comic/series called - Mickey à travers les siècles (aka Mickey Through the Centuries). The stories featured Mickey Mouse as a time traveller. From what little I can gather the series ran from 1952 to 1970 as part of a larger Mickey Mouse comic. In 1970 it appears to have gotten its own comic which continued until 1978.

Here's one link to a list of the various series and the historical characters that appear in each one. It also lists whether or not the series was historically faithful for a particular time period.

No word on whether he owned a time machine or just simply showed up in each of these time periods unexplained.

Anyone ever read/own one of these issues?
Posted by Andy Taylor at 10:55 p.m.