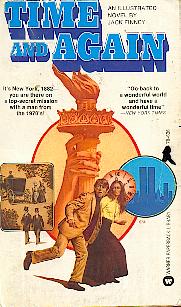 Jack Finney (1911-1995) is one of those rare writers that succeed at every genre they attempt. Finney got his start in the late 1940s and early1950s writing mystery and crime stories for such magazines as Ellery Queen and Collier's. His first novel “Five against the House” (1954) was made into a movie in 1955 starring Guy Madison, Brian Keith and Kim Novak.

He also wrote in science fiction during this period successfully publishing a number of time travel short stories such as The Third Level (1950), Such Interesting Neighbors (1951) and I’m Scared (1951). For his second novel Finney produced a thriller with a science fiction edge that you may have heard of - “The Body Snatchers”. The novella was serialized in Collier’s magazine in 1954 before being released as a novel in 1955. It would go on to be adapted as a film in 1956 as “The Invasion of the Body Snatchers” and would eventually be remade three more times - in 1978 as “Invasion of the Body Snatchers”, in 1993 as “Body Snatchers”, and most recently in 2007 as “The Invasion”.

Finney’s most recognized work and one of my favourites is the classic time travel novel “Time and Again” (1970). In it a young advertising executive, Si Morley, who travels back in time to 1882 and visits New York City as part of a government experiment. What makes the novel so remarkable is Finney’s ability make the time period come alive for the reader. Well researched and even more seamlessly told, Finney manages to incorporate historical settings, events and characters into tapestry that becomes 1882. Originally billed as an illustrated novel, the book and subsequent paperback came complete with photographs and sketches of the some of the key scenes and locations in the novel. Whereas most time travel stories use either ‘scientific’ time machines, or some form of mystical/magical phenomenon to transport their protagonists in time, Finney takes a different perspective using hypnosis. He suggests that time is but an illusion that keeps the subject in the present and by immersing Si in the elements of 1880s manages to break down the barriers. It sounds hokey at first, but in the Finney’s hands it is convincing. You almost want to believe Finney was the one that visited past and is simply retelling his own experiences..

Finney followed up the novel twenty-five years later with a sequel “From Time to Time” which was published shortly after Finney’s death in 1995. The sequel again features Si Morely who becomes involved in a plot to prevent World War I and is largely set in 1911.

A collection of Finney’s short fiction, most of which involves time travel, has been published as “About Time” in 1986. While some of the stories are dated, Finney’s descriptive prose and concise story telling make them well worth reading.

If you haven't read any of his work before Jack Finney is definitely an author to check out.