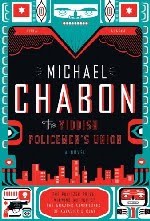 Michael Chabon's The Yiddish Policemen's Union is a ground-breaking alternate history novel that was released in 2007. Combining the best of alternate history story telling and hardboiled detective fiction, it's a bit like Harry Turtledove meets Raymond Chandler.

He has the memory of a convict, the balls of a fireman, and the eyesight of a housebreaker. When there is crime to fight, Landsman tears around Sitka like a man with his pant leg caught on a rocket. It's like there's a film score playing behind him, heavy on the castanets. The problem comes in the hours when he isn't working, when his thoughts start blowing out the open window of his brain like pages from a blotter. Sometimes it takes a heavy paperweight to pin them down.

Chabon asks what if the Jewish state of Isreal never gained a foothold in the Middle East in 1948? What if, instead the Jewish refugees from the Second World War found sanctuary in the most unlikely quarters - Sitka, Alaska?

The novel opens with the imminent threat of the 'Reversion' of the Sitka settlement to the U.S. and the displacement of the Jewish settlers to points unknown after building a culture and a community for 60 years.

Meyer Landsman, an alcoholic homicide detective at the end of his rope, finds himself investigating the murder of a John Doe in the Zamenhof, the rundown hotel that Landsman calls home. As Landsman begins to unravel the identity of the murder victim with the aid of his partner and cousin, Berko Shemets, they find that a number of people don't want the murder solved including Landsman's superior officer and ex-wife Bina Gelbfish. Bina has the unpleasant task of informing Landsman and Shemets that the squad has been ordered to solve all cases or declare them unsolvable before Reversion occurs in two months time.

Winner of the Hugo, Nebula, and numerous other accolades the novel is well worth the read.

You can check out my full review here - Andy's Anachronisms review of Yiddish Policemen's Union by Michael Chabon
Posted by Andy Taylor at 9:42 p.m. 4 comments: 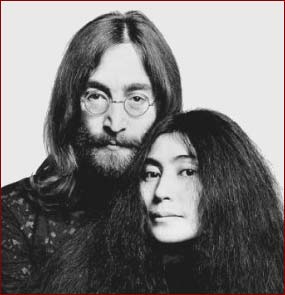 No word on when we might see this in theatres.
Posted by Andy Taylor at 9:55 a.m. 5 comments:

Road To the Multiverse - Family Guy 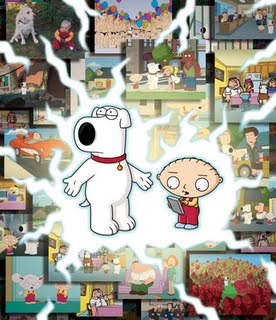 Family Guy's Season 8 debut "Road to the Multiverse" found Stewie and Brian leaping between alternate universes a la Sliders with Stewie's hand-held 'timer'. The jokes are often crude, offensive and sometimes fall flat, but when they work, they're brilliant.

They start off with a universe where Christianity doesn't exist and as result the "Dark Ages" didn't happen(?) which means science and technology has surpassed that of their own universe. When Brian asks Stewie what happened to all the religious inspired art and culture, Stewie takes him to see the alternate version of what is painted on the ceiling of the Sistine Chapel.

The second universe they visit is a Flinstone's inspired one with the obvious Peter/Fred and Lois/Wilma cliches. They try way too hard to riff on the Flinstone's penchant for adding ROCK-like suffixes to words. The result is a SMURF-esque mess where ROCK becomes verb/noun/adjectives.

The third universe finds Quahog and the United States as a Japanese version that was conquered during the Second World War. It's no Philip K. Dick "Man in the High Castle", but it wasn't meant to be. Played for cheap fart jokes and racial/cultural stereotypes it's one of the weaker scenes for me.

The fourth universe they arrive in seems normal at first until they discover that everyone has two heads, one happy one sad. Some fairly lame jokes follow only for the scene to end with two-headed baby Stewie making out with himself. Ewww.

The fifth universe they jump to finds them stuck in a glacier with the device out of reach of both of them. Brian finds when he wags his tail the ice melts a little, so Stewie must get him "worked up" to the point where his tail melts through and they can reach the device.

The next universe, their sixth lands them in bizarre universe where everyone has to poop all at the exact same moment and are dancing on the spot trying to hold it in. WTF?

The seventh universe they visit finds them in a Disney-esque animated world (done in the style of Beauty and Beast) where Peter extols the virtue of pie, while Lois and anthropomorphic animals and inanimate objects join in the song. Stewie and Brian are intoxicated of this universe until they find out that its a very anti-semitic one, sending up Walt Disney's rumoured anti-Semitic leanings. A little too over the top for me, but fun to start with.

The eighth universe finds them in a Robot Chicken version of the Family Guy where the crudely stop motion animated versions of Peter and Chris are watching tv sitting on the couch. Stewie and Brian have an argument with them and Stewie yells "How does it feel to be on a major network for 30 seconds?" Chris Griffin swears at them before they leave. The in joke here being that Seth Green who does the voice of Chris Griffin is also an executive producer and voice actor for Robot Chicken series.

The 9th universe is a bombed out post-apocalyptic world where they discover Sinatra was never born, therefore Kennedy was never elected President, Nixon was elected and botched the Cuban Missile Crisis causing world War III. The scene while brief provides one of the more funny and tasteless jokes involving Lee Harvey Oswald and Mayor McCheese.

The next is a bizarrely animated 'low resolution blocky universe' that looks like a cross between bad Korean anime and retro Game Boy graphics. The Griffins of this universe have a brief nonsensical argument that leaves Stewie 'frightened'.

The next two universes are the quickest and best sight gags of the entire show. In the 11th jump, they land in a world with fire hydrants from horizon to horizon. Brian simply says "Love It", Stewie says "Hate It" and they teleport out. The 12th universe is awash in a sea of nearly nude men wearing speedos, holding balloons, with a prominent rainbow in the background. Stewie this time gets to say "Love It" and Brian says "Hate It" before they jet.

The 13th find the duo in a universe where Brian is a real dog and Stewie a real baby. It doesn't take them long to leave this universe behind.

The 14th universe is "where everything is depicted as a Washington Post Political Cartoon." Brian pretends to get the political satire, while Stewie calls him on it.

The 15th universe has a sole inhabitant who is "a really far away guy who yells compliments". Its absurd and funny.

The 16th is the universe of "misleading portraitures" in which really far away guy makes a brief appearance.

The 17th and final universe they land in is a "Planet of the Apes" take off where Dogs rule the earth and have pet humans. In this universe the Griffins are a family of dogs and Brian is their pet human. Brian 'accidentally' smashes the hand held device. Stewie frustrated with the role reverse seeks his revenge on Brian by "doing his business" in the park. In this universe Stewie the dog confides in Stewie the human that he too has perfected multiverse travel and can help him get back to his own world. Dog-Stewie points out that Human-Stewie must have had the "shuffle" feature on his timer turned on hence the random jumping around between universes. When Stewie and Brian escape to their own universe Human-Brian makes the leap with them as well, only to come to a tragic end.

For me I appreciated the sight gags and the action that happens off screen, but is described in several of the universes. The plot device of the hand held timer was great since allowed Stewie to give the audience a thumbnail sketch of each universe just like Al was always giving Sam in each Quantum Leap episode without wasting time.

Definitely worth a look. If you are in the United States you can probably find this on a streaming site such as Hulu.com, outside of the US you might have to hunt a little harder for a copy of it, if you were like me and missed when it first aired.
Posted by Andy Taylor at 10:50 p.m. 5 comments: