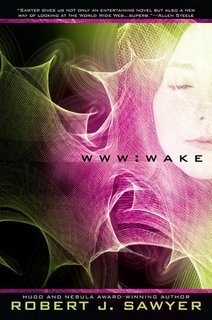 One of my favourite SF authors, Robert J. Sawyer is coming to Sudbury on Monday the 25th to host a reading and signing of his latest book Wake. I'll be there, book in hand.

Rob has made numerous contributions to the Time Travel/Alternate History genre in his long and short fiction over the years. I have reviewed End of an Era and Hominids on my site a few years ago. One of his other fantastic novels that deals with time (travel) is Flashforward (or Flash Forward as it has now been republished as).

If you've been living under a rock, you may not know that ABC has developed Flash Forward as a series (13 Episodes) for the fall 2009 line up and has been running teaser ads for during the final few episodes of LOST.

You can catch one of the teasers here on YouTube FlashForward Teaser. It's being hailed by many as LOST's replacement and I think rightly so.
Posted by Andy Taylor at 12:24 a.m.